CALLING FOR VOLUNTEERS FOR FUTURE EVENTS:

Working Bee: The AHS Collection has significantly grown over the past two years and needs a gathering to sort, record, digitise and display. Please let us know if interested to assist.

AHS wish to acknowledge with gratitude Horsham Rural City Council for allocation of Community Development Grant 2022/23 funds for roof restoration works above the Arapiles Climbing Museum. This project is to repair sub structure supporting a box gutter, by bolting through the brick facade to the roof structure. Quoted works carried out by local business HB Enterprises, Malcom Matheson.

The Research Center, thanks to funding support received from the Australian Governement’s Culture, Heritage and Arts Regional Tourism Program, received an upgrade of its power and lights. The work was completed by local tradesperson Mark Radford. 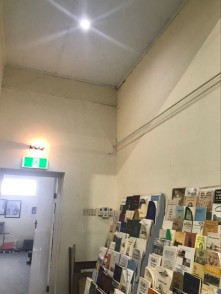 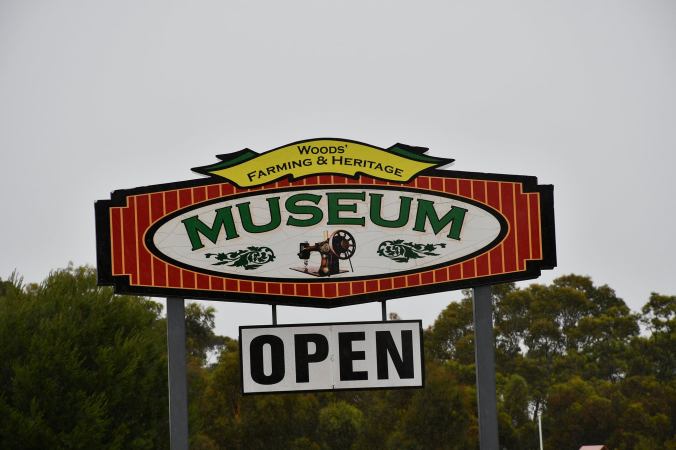 AHS invite interested people to join us in a 21seater bus for an excursion to Woods Farming and Heritage Museum in Rupanyup, departing Horsham on Friday July 22nd at 9.30am. Car link transport available if required. Cost is $30 per passenger and includes morning tea on arrival and a provided lunch. This setting is home to an incredible display of old farming as well as household memorabilia. Some of them date back to as far as the 1920s, with so much more to offer than just the tractors of days gone by.

Both young and old will be able to learn many things about how farming was done in the past. Some of the interesting and unique items on display include old generators, sewing machines, clothing, television, toys, and much more. They speak of Australia’s rural history, and you’ll be able to get a glimpse into how people lived during the late 19th and 20th century. There are also areas that recreate how town shops looked like, and it does make you feel like you’ve just stepped back in time.

Friday 25th March saw the launch of three books dedicated to Natimuk and its settlers. Horsham Mayor Robyn Gallen and member for Lowan Emma Kealy were the two dignitaries who welcomed people to country and at the same time, back to Natimuk. 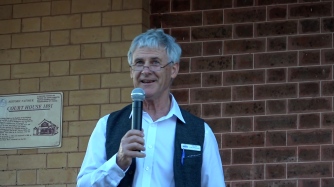 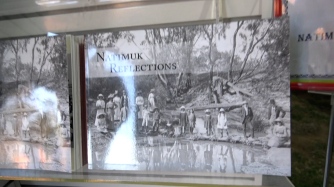 Author and AHS member Keith Lockwood was master of ceremonies. He also spoke about his book: Natimuk Reflections, a picture book commissioned by AHS and including a stunning collection of photographs from the early days to the present day.

The Woolmer Collection takes pride of place in the book. Horace Woolmer’s photographic plates were re-discovered by its McQueen family descendants and Mary French, daughter of the late John McQueen, talked about the collection and the memories attached to it.

Colin Haustorfer talked about his book Natimuk District Pioneers- Celebrating 150 Years from First Land Selection in the Natimuk District on 21st September 1871. Orders are being taken if you missed on getting your copy, Colin ran out!

The third book published was an impressive compilation by Gianna Sudholz, called  Sudholz Family History – About Time. The book was twenty years in the making, and her husband David was the official speaker for its introduction. Arapiles Historical Society President Peter French also said a few words and opened the exhibition in the courthouse, one of the  AHS sites. 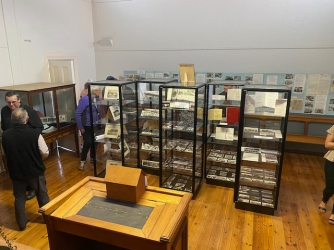 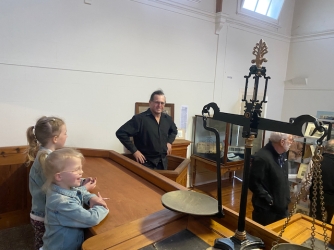 The Courthouse exhibition is a collection of photos and memorabilia from the previous Back to Natimuk week ends of 1924, 1947, 1972,1988 and 1997. Jennette Sudholz, Liz Both and Gianna Sudholz curated the exhibition.

You can listen to the speeches here:

Arapiles Historical Society are grateful to acknowledge Horsham Rural City Council (HRCC) for the contribution of funds towards the cost of production for ‘Natimuk Reflections’, a pictorial publication of Natimuk which will coincide with the celebrations of Natimuk’s 150th year of settlement anniversary, to be released at the 130th annual Agricultural & Pastoral Show as mentioned below *.

This publication will include photographic records of the old tennis courts in flood, and transition to the opening of the new courts, hence creating available funds from HRCC for our community’s benefit, including ‘Natimuk Reflections’.

Another meeting was held on Wednesday evening to keep the ball rolling for Natimuk’s back-to and grand annual show next year, scheduled for the weekend of *March 26-27.

We will keep you all up to date with developments as they occur.

We are excited about the street parade which will kick off the 130th annual show and back-to celebrations possibly on the Saturday morning. So, it would be good if groups and individuals could start thinking about joining the fun. Polishing the vintage car, decorating the bike, making a float, creating a costume… Ideas can be tossed around, but it might be wise to wait until after harvest and Christmas to actually create something due to Covid-19 uncertainties.

Let’s all keep positive, look ahead and plan to gather in March to celebrate our town’s 150th birthday – Keith Lockwood, for Arapiles Historical Society and Back-to-Natimuk trustees.

If anybody knows of some gentle horses who could willingly and safely pull horse drawn carriages please contact AHS members or pop in Tuesday afternoons 2-4pm at Research Centre.

2022 Historical Calendar: AHS volunteers and community members have been working diligently to create a historical calendar for next year with a sporting theme. With the final production ready to go to print we hope to soon release publications through our usual retail outlets.

THE BOWLER……. (Contributed by Jenny Dumesny.)

My old man’s a bowler.

He would rather play a game of bowls

then go out on the booze.

And if his wife asks him

how long before he’s back,

He says he won’t be home

till he’s put one on the jack.

Now when he bowls a short one,

he gives his pants a hitch.

He swears the next one will be up

then puts it in the ditch.

And if they ask him why he didn’t

He puts the next one out so wide,

there’s three rinks in between.

When my old man’s bowling

and finds he’s one bowl down,

he asks the Skip to let him run

the shot bowl out of town.

But when the Skipper wants him

to break the head,

he puts a fast one down

and takes his own bowl out instead.

When my old man’s bowling

he says it makes him sick,

to see his rival get a shot

from off a flaming wick.

So, if you see a bowler

don’t take his shot bowl off the Jack

Colin turned ninety years old a few weeks ago. Sadly, his twin brother Neil passed when he was eighty nine. 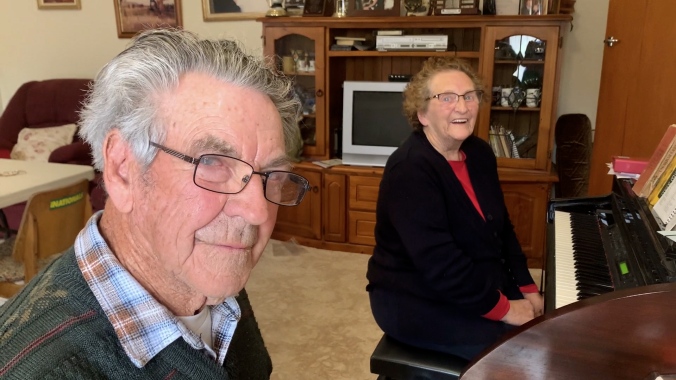 Valma and Colin Webb have been playing together for many years: Val on the piano, Col on the organ. Brigitte Muir from the Arapiles Historical Society caught up with them at their Grass Flats home to record the history of their families in May 2021. Colin’s words and the voice recording of both Val and Col will be available later this year.

In the meantime, you can watch them play at this link: https://youtu.be/ksBRMReo7O8

Featuring a black & white collection of historic schools and activities across the region, these calendars can be purchased from Natimuk’s Post Office, the Craft Shop and Milk Bar or by phone on 0400 531950.

We sincerely thank all contributors and supporters.

The calendars are now available for $10 each.

Lou Lang (dressed as a woman), Angus and Charlie McCuish ( wearing cap). The driver is Eric Werner. The German wagon was used to move the Lange family from South Australia to the Wimmera in the late 1800’s. This is a 1947 re-enactment. the Gladigau house, behind the wagon, now belongs to Eric and Sonia Jones.

Every second year in early November, while punters grab their hats and wallets and head to the Melbourne Cup,  The Frinj comes to Natimuk. Or Natimuk becomes the Frinj. A big arty farty fun festival that brings people flocking to town, and is an absolute joy for the inhabitants of our not so sleepy little town.

The Frinj Festival starts with a Hay and Thespian Mardi Gras (*) Parade on the Friday. It used to be that no one was watching it, because everyone was in it! These days, quite a few visitors line the street, and a significant amount of locals let their hair down in the Parade.

(*) this is a word play, courtesy of the inimitable Greg Pritchard, based on the name of the organisation auspicing the do ( ACT, Arapiles Community Theatre) and the fact that, well, we live surrounded by farmland.

For the Arapiles Historical Society, the Frinj is an opportunity to share our history with the younger generation, the newcomers, and the visitors. There will be a display this year at the Garage, and Jennette Sudholz, researcher, has been busy gathering information on the fourth wave of inhabitants to the Wimmera, the German settlers who came from South Australia. We do possess an original German wagon ( from the Werner Family), which was part of the fourth wave of settlers/visitors to the area, after the first people – the Duanbarap-, Major Mitchell’s expedition (1836) and the squatters – such as the Wilson brothers (1844) and others. (**)

The German families came from the Mount Gambier- Penola area and stopped at the lake, with the Haustorfer, Speher and Klowss families first filling in land applications in 1871. (**) 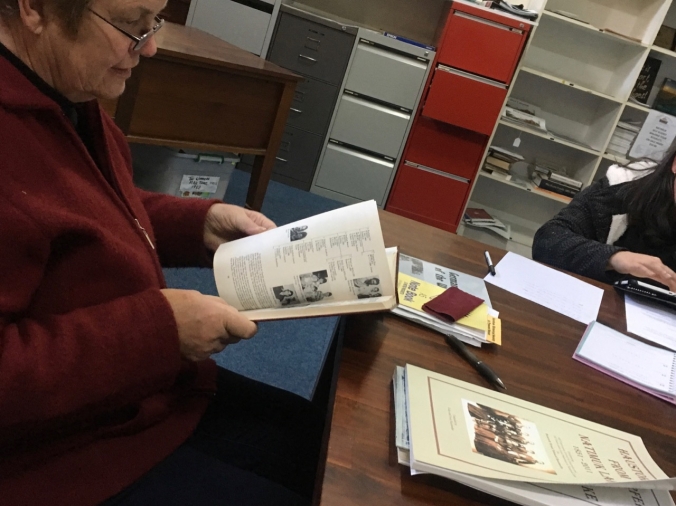 Jennette , along with a few other dedicated volunteers, can be found most Tuesdays afternoon at the AHS Research and Archives Old Masonic Lodge home researching the history of our area.

Listen to Jennette’s interview and call for help HERE 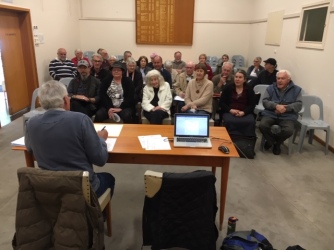 AHS hosted the 2019 meeting of the WVAHS (Western Victoria Association of Historical Societies) Wimmera Zone on Sunday 22 September. We were lucky to have close to thirty representatives of Dimboola, Warracknabeal, Stawell, Horsham and Arapiles Historical Societies, as well as Elleyne Hockley from the History Victoria Support Group (RHSV) is  also the archivist of the Castlemaine Historical Society. She gave a very informative presentation on what the support group can do for local Historical Societies. 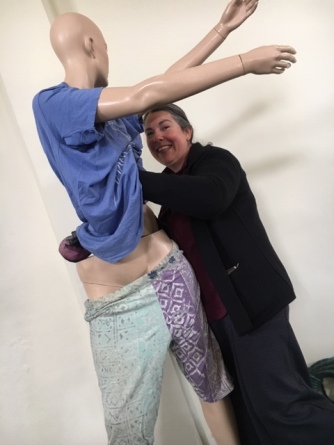 AHS Secretary Jenny Elliott takign a trip back to the nineties

It was also a wonderful opportunity to trial outfits on our Arapiles Climbing Museum mannequins!